You will take in the amazing atmosphere of Venice with this cultural walking tour.

San Rocco is a must see with its ornate façade designed by Bernardino Maccarucci. It is one of the plague churches of Venice, built as thanks for relief from the plague. Venice was particularly vulnerable to the plague.

Santa Maria Gloriosa dei Frari The Basilica, usually just called the Frari, is one of the greatest churches in the city, with a status of a minor basilica. It stands on the Campo dei Frari at the heart of the San Polo district.

The terrain was given by the doge Domenico Tiepolo to Dominican friars in 1246, after he had dreamed of a flock of white doves flying over it. It was completed only in 1430; it is also known as the pantheon of doges, as twenty-five of them have been buried there.

Accademia gallery. In the early 18th century, while Venice was a thriving community of artists, painters were members of an artisan union and unlike other large cities there was no art academy. Its foundation was realized in December of 1766 when the Senate ordered the construction of an Academy of sculpture, painting and civil architecture, similar to those of the main cities of Italy and Europe.

Currently the museum houses a rich collection of Venetian paintings ranging from the Byzantine to the Gothic until reaching Renaissance artists, Bellini, Carpaccio, Giorgione, Veronese, Tintoretto and Tiziano 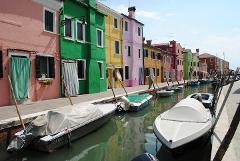